I have really enjoyed reading all the blogs about this years 24 Hours of Moab. It made me want to revisit memory lane again.

1995
First year for 24 Hrs of Moab. It was hot as hell during the day then it snowed sideways at night. I remember at night there was tons of mice on the course and you couldn't avoid riding over them. They would make this crunchy sound every time you hit them. We got 2nd in expert that year. 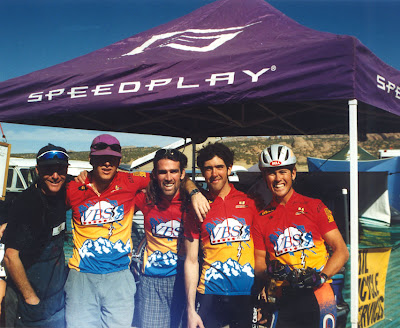 L to R: Tim Young(our sponsor and owner of Vail Bicycle Services and our wrench), Mike Gibbs, Todd Johnson, Me, and Mike Janelle. (he won the duo pro this year)

Team Defenders (Roger Bird, Floyd Landis, Dave Duvall and Brad) who won 24 Hrs of Canaan that year couldn't stop the Schwinn juggernaut (Mike Kloser, Dan McNeil, Mike Skellion and Ranjeet Grewal). Mike Kloser was and still is one of the fastest people I have ever seen on a mtn bike and was a staple in Vail mountain bike culture. I remember him coming in after a night lap and commenting on how fast Dave Duvall was throwing down with him. Dave Duvall was a bike messenger in Baltimore where I grew up. He was one of the few people who could wallop on Floyd back in the day. He would messenger around Baltimore on his mtn bike that had a 60 tooth big ring. Everyone needs to quit bagging on messengers, I know many that can throw down with the best.

Jeremy Nobis use to hammer it too until he started to make the real money skiing big mountain lines in Alaska.

Here is a pic of Team Defenders RV, wonder if any testosterone was in there Floyd? 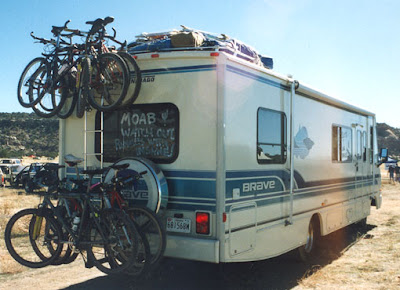 dang! these last few blogs are the best ever....far before my time, but at a time when I recognized names...imagine all the stars and heros getting to race each other on Chapman Hill in Dgo, then riding home from the race to your house.

how did the sport disappear and shink to what it is now?