This race back in the day was huge. All the big pros would show up and it was the first real race for most of us living in the snow of Colorado. It was bigger than most National races I have attended and the field would sometimes include European pros wanting to do battle with the Americans. Back then the Americans actually use to dominate mtn bike racing. 1994 was the last time an American (Ned Overend) won a World Cup race. (He actually won 2 World Cups that year). Also back then John Tomac was one of the fastest guys going downhill and uphill. He use to win both disciplines. When was the last time a pro mountain biker could claim that? 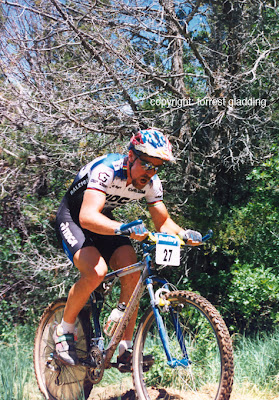 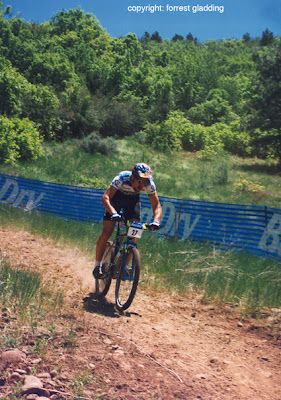 Believe it or not thats Bob Roll with the Goat Tee and riding a Pro Flex. Dude actually won the Spokane National in 1995. Thats Travis Brown behind him. 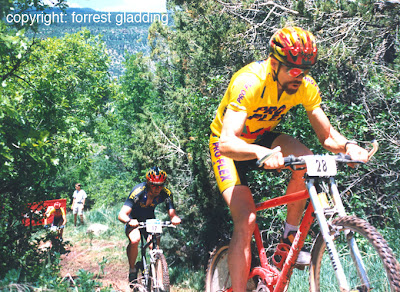 Bob Roll and Steve Tilford on the Specialized 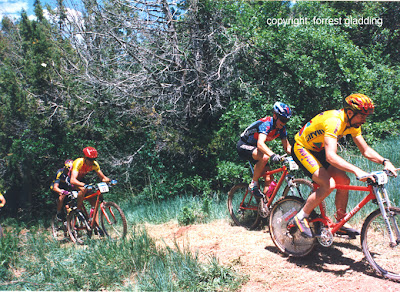 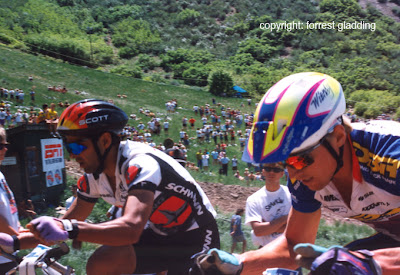 Tinker and Rishi Grewal battling it out. Rishi was notorious for going all out ballistic and either blowing hard or hanging on to win. 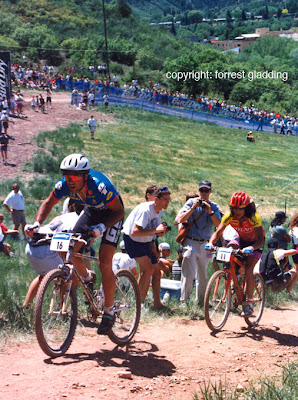 Pat Mac and Tinker. Pat Mac is on a Park Pre, do they even make bikes anymore? 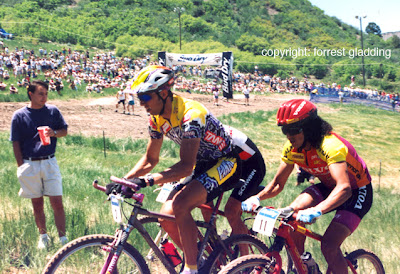 That was a great race that year. Do you remember the Iron Horse when it rained & people were pushing dragging their bikes for most of the time? Absolutely killed me & my bike. Had to get an entire new drive train.

Yes I do!! I have pictures of our bikes after that race. That was one of the few races I had to drop out of, my bike serioulsy weighed about 60 pounds and stopped moving, it wouldnt spin! I did a stress test earlier that year and it was determined that my max heartrate was 188, on Chapman hill my heartrate monitor beeped 188 pushing that thing! Dont know if you did the National Race in Georgia that year too, same kind of mud, Jonathan Page actually won the expert race??

I managed to finish that year but only because I had been running so much in school. was able to drag my bike. When I was done I had ZERO brake pads left. You should post those pics.

Never did any of the East Nationals only the ones out west.

Just digging around and found this about Iron Horse Classic. 94 was the first year I did this race. Chapman Hill was brutal!!! I was kicking butt in the sport class and pinch flat took me down to a horrible finish! (Darn kevlar tires). Native of Colorado used to attend all the World Cup races in Vail. Always small talk with Bob Roll. He is a cool dude! Used to chat with Tinker in the alley way behind my place of work at a Volvo dealership when he was with the Cannondale/Volvo team. They would drop the wagon off for service. Boy these pictures bring back memories! Thank you...

Just came across this (I really need to get out more!) Brings back lots of great memories of racing in Durango! Thanks for posting the pics!
Wiens