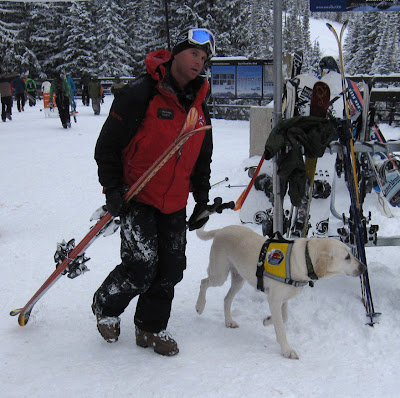 An avalanche occurred Sunday, Dec. 14, 2008 at Snowbird Ski & Summer Resort on
High Baldy, hike-to terrain on the east side of the resort.

One person was recovered from the debris at 1:18 p.m. and was transported to University Hospital via Air Med in critical condition.

I am at a loss for words. I was on Baldy when the avalanche occurred. Me and Ian decided to do a line skiers left of where the slide would rip. I saw some of my friends on the debris pile looking for victims. My friend told me that when they pulled her out of the snow she was blue, he saw the whole thing go down. That crushed me. It was such an epic day until then. The slide went from the Pyramid Rock on top of Baldy all the way down and over the Amphitheater. I am hoping for the best for the victim. I still can not believe it happened. So many of us rode that line all morning long without any consequences. She was buried too deep for the probe line to find her. I guess the avalanche dogs located her. 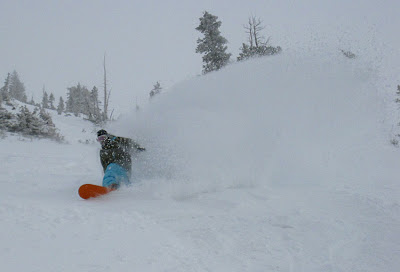 Ian on Baldy, minutes later we would come across the avalanche.

Update: The woman caught in the slide has died. I feel really sad about this. It breaks my heart to see someone lose their life sharing similar passions as myself.
Posted by Forrest

I am glad that Melanie called me and let me know that you were OK. I feel badly that someone died doing what they liked to do, especially when I know how careful they are at Snowbird. Take care of yourself, which I know you do..Love, Marsha

There have only been five inbounds avalanche deaths in Utah since 1950versus 61 lightning deaths.

ONE OF THE HEAVIEST THINGS I HAVE EVER BEEN INVOLVED IN.

SO sad indeed. Just a reminder to wear a beacon in bounds on deep days cause shit does happen, and with this horrible snow pack it is time to be careful for the remainder of the season. R.I.P.