So this past Sunday my family and some friends decided to go snowboarding at Alta.  Of course they had to shut down the lifts, get ski patrol, get the town sheriff and have the President of Alta, Ono Wieringa come down to make sure us snowboarders learned our lesson. We had valid tickets and wanted to enjoy the powder day with family and friends like I do at almost every other resort in the world. I can not believe that a resort that operates on 85% National Forest Public Land is allowed to keep snowboarders out!

I am so tired of this whole fabricated "Snowboarder vs Skier" attitude that Alta perpetuates.  I have friends and family that ski and snowboard and we want to be able to shred together.  I saw this cover on FreeSkier Magazine and it gave me hope. Maybe people in the ski industry are waking up that we all share the same stoke and it is time to end policies that perpetuate tension.  As a snowboarder I am telling skiers and the ski industry that nothing ticks off a snowboarding family more than not being able to ride the same mountains. The worst part is that it is not just any mountain, but Alta, the powder gem of North America. It is meant to be ridden by the ultimate powder device, a snowboard! 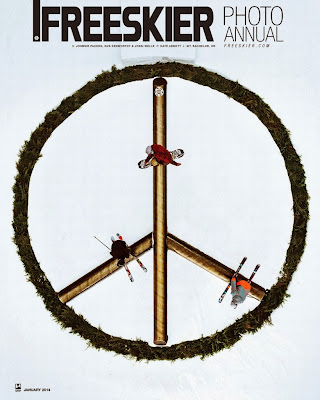 This is why I helped form Wasatch Equality. Wasatch Equality is legally challenging Alta and the National Forest regarding their no snowboarding policy on publicly leased land!  A few private owners do not get to use public lands as their own private ski country club. The policy is bad for Utah, bad for families and it is time for it to end! I love Alta and do not encourage anything but a "Sunshine Policy" towards skiers.

I guess the silliest part of the other day is that I don't even think Alta or its ski patrol even really know their own no snowboarding policy.  Rick was able to board the lift in his splitboard but once he got to the top ski patrol was waiting and said he had to ski down.  After explaining to the patroller that splitboards are not meant to be ridden downhill and they would have to sled him down they let him ride down the snow like every other resort does millions of times over without incident. However another patroller that day told us that you can snowboard at Alta and on National Forest land all you want, you just can not use the lifts.  So can we go up in ski mode and then snowboard down?  Why am I not allowed to snowboard down Baldy shoulder into Alta from Snowbird when skiers are allowed the same privilege?   Why can't I go up the lifts in split mode and access the backcountry gates on my splitboard instead of having to skin all the way up from the bottom? What are the real rules regarding snowboarding at Alta?


Utah loves the Olympics. We pride ourselves on welcoming the World to Utah in 2002 and now Utah wants to make another Olympic bid.  But the dirty little secret is that we don't really welcome snowboarders.  Even though snowboarding is one of the highest rated Olympic events, Utah snowboarders are still being shafted. How can "Utah-State of Sport" really be OK with this policy? How can Ski Utah  look at my family with a straight face? How can Ski Utah pretend to be on the side of snowboarding and promote visiting here?  I am telling you if you are from out of State and want to do a ski trip here with your family of skiers and snowboarders, just go to Colorado or California where you are all welcome. Can you imagine the Ski Associations of Colorado and California promoting no snowboarding policies?  How can the Mountain Collective really support a network of resorts that shun snowboarding and expect to sell passes to snowboarders?  This makes no sense!  How can the Utah Office of Tourism use my tax money to promote places that keep my family out of the Wasatch?  It is time that these hard questions start to get asked in our community!


I also want to point out that Alta has a strict no uphill policy during the ski season and Snowbird has signs that say Alta is no snowboarding but you can ski into Alta.  In effect Alta has closed off National Forest Land to snowboarding in the winter.  Also keep in in mind that there are over 100 ski resorts that operate on National Forest Land and do not have issues with snowmobiles, tubes, sleds, etc.....  Allowing snowboarding on the lifts does not open up the Wasatch to other uses!  Get the facts!

Oh just go ride the Bird, you whiney litigious douche bag! Alta DID allow snowboarders in the early 80s, but promptly banned them due to all the accidents and injuries. It's not an "equality" issue (you've got NO leg to stand on in court, BTW), it's a SAFETY issue. All you're gonna end up doing is drive up lift ticket, food, and services prices just so you can publicly bitch. Way to punish the rest of us for your temper tantrum and 15 minutes of infamy. Gawd!

I love it. Great stuff.

The part about "let them ride!" is encouraging.

Nuts and bolts style, I think forcing the Forest Service's hand is smart. The Government doesn't want a part of discrimination (or the appearance thereof). I may be naive, but I just can't see this failing.

Not sure how much you can say, but what is Alta's current reasoning for not allowing snowboards? Do they have any safety numbers or erosion stats or anything other than "we just don't want em?"

Also: does my Snowbird ticket help Alta in any way these days? It used to, right?

At any rate: good luck, and know you have my support.

100% probability of me being there on Day One of Snowboarding Alta.

BRAfuckin'VO! The USFS involvement = the pin has been pulled.

I'd have never expected a closed minded state like Utah to have legal gay marriage before snowboarding on all the lifts!

Sara isn't really serious, is she?

Go online to Vaildaily.com and pick click on the e edition for 1/17/14 and look on page A29. You made colorado news. Too funny.

I will publish all comments as long as you are not anonymous or I know you.

i commend you for going after these fascist idiots, can we donate to the fund? I hope the results of this either bankrupts Alta, or that everyone snowboarder acts like such a doosh it forces these skiers out and then WE run the place. fuck you Sarah, and all those like you.

Also can we not swear and have civil dialog on this issue after all this is a family blog.

Not delete? Really? Then who deleted all my commentary over on WE's facebook page eh?

I dearly hope this will not open up the jar of unintended consequences. If WE prevails what is to stop motorcycle lobbyists from challenging hiking trails on federal lands that exclude motorized access?

I have seen no evidence of community organizing and relationship building with the other principal stakeholders and as such http://wasatchequality.org comes off as suspect, brash, confrontational and manufactured.

That the conversation on facebook is being censored is another warning flag in my book.

WE's tactics as they stand now are ill conceived in my view and since snowboarders are not a protected class and lease holders have a right to the private enjoyment of their land with in state and federal mandates. I hope an amicable outcome prevails but I doubt it.

echoversky you have been nothing but brash and confrontational on all fronts. For the last time you do not understand the issue and your claim that motorcycles will now be allowed is a SHAM! First of all the law of 2011 prevents all the things you worry about happening at ski resorts. Those uses are already banned, yet snowboarding is totally legal in that law. Get the facts dude. For someone who doesnt live in this community you sure are making this all about you!
http://www.aspentimes.com/news/9796881-113/aspen-ban-skico-alta

We get you hate snowboarding. It is funny you call us confrontational and brash when we have been nothing but nice and positive, your the one screaming and harrassing us. No more comments on my blog either, its my blog dude. Just read any comment section on any article and you tell me who is being confrontational. Get over that you ski and hate snowboarding, time to move on!

A better analogy is the Alta is telling hikers what type of hiking shoe they can use. High top versions are ok, but low tops you are not allowed to hike.

Forrest, really appreciate the calm and classy way you're handling everything here as obviously it's going to be a powder keg. It's easy to resort to name calling but far harder to build a supporting argument using research and facts.

I am so glad somebody has finally taken the initiative to pursue this. Ever since the sort-of merger of Snowbird and Alta this is even more troubling.

As pointed out by some less, ahem, enlightened individuals, snowboarders are not likely to be considered a protected class. However, in order to discriminate, the government still must demonstrate a rational relationship to a legitimate government purpose. I question what that purpose could be (higher traverse lines?). Anyway, this is why motor vehicles can be excluded (see legitimate purpose) but disparate sliding devices that can be controlled (i.e. no sledding) should not be. Are monoskiers allowed? Good luck distinguishing snowboards from them, Alta.

Anyway, I encourage everyone to donate to WE, and I truly hope you prevail.

As an aside, a snowboarding friend of mine was very seriously injured by a skier who was completely out of control the other day. Snowboarders do not have a monopoly on causing collisions as some seem to imply.

Senator Udell of Colorado has said "A small clarification to the law means that appropriate activities like snowboarding, zip lining and concerts can take place on public lands."

Utah's own Rep. Rob Bishop is quoted "Dear Chairman Hastings: I am writing to you regarding H.R. 765, the Ski Recreational Opportunity Enhancement Act of 2011 which amends the National Forest Ski Area Permit Act of 1986 to allow Forest Service permits to include year-round recreational use of ski areas. The bill also amends the Act to allow for snowboarding and other snow sports on Forest Service lands, in addition to ski activities already permitted. H.R. 765"

Awesome post Forrest! Your work on this problem is incredible. We can't wait for the real opening day. Definitely want to be there.