With the hype for the 2010 Vancouver Olympics starting to come to a buzz I thought it would be a good time to revisit the 2002 Salt Lake Olympics.

Whistler is such a party town, its going to be one wild Olympics. Wish I could kinda go. I can't believe its already been 8 years. This year's pipe contest is going to be crazy, especially with the double corks and new training methods such as private halfpipes and foam pits. 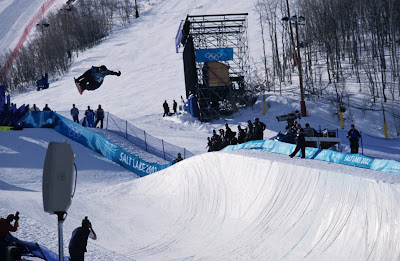 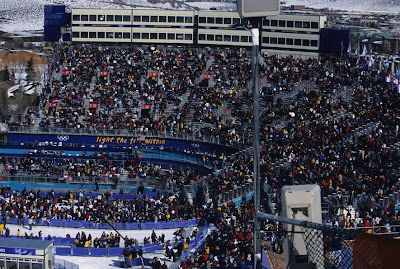 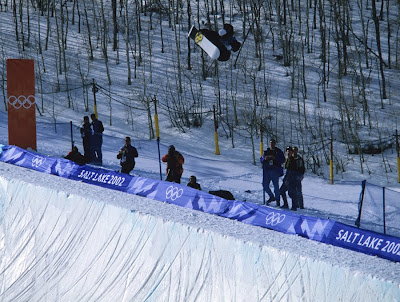 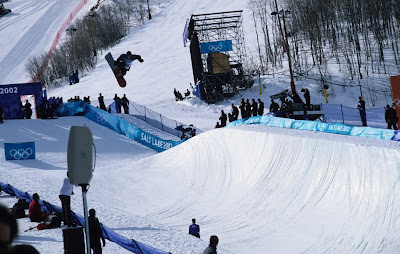 I have never seen such a perfect pipe.

Olympic Halfpipe finals. It was pretty incredible. Me, Ian and KB bought some tickets that morning from a scalper and had a blast!! We even made GO USA! and Free Alta posters to wave from the stands. The place was so loud. I lost my voice for a few days afterwards.

The USA swept the medals with Ross Powers (gold), Danny Kass (silver) and J.J. Thomas (bronze). Ross Powers probably did one of the highest airs in the pipe up to that point in history during his medal run. Danny Kass was and still is so smooth. During the warm ups he would be doing straight frontside airs and giving the crowd the horns to show his love for the home crowd. Danny is still one of my favorite riders of all time. Very few ooze style like Kass does. Kass also went on to win a silver medal at the 2006 Olympic Games. I was stoked on JJ Thomas and his performance. I still have a place in my heart for Colorado riders.

The Japanese kids were going so huge and flipping so high that they would only get 6 hits out of their entire run down the pipe. The rest of the guys would get 12 hits a run! Heikki Sorsa was killing it too, but a fall on the last hit of his medal run put him out of contention. Heikki was a crowd favorite behind the Americans for sporting a huge mohawk for the event and absolutely killing it. I am not sure what the Americans knew what to think of Giacomo Kratter's ponytail. That was one of my favorite winters ever. The Olympics in Salt Lake were a blast. Anyone who talks about utah stereotypes wasnt there. That was a hudge party! Not to mention the days of pow and Mt Baldy all to yourself! The Bird was relativley empty if I remember right. Anyone who can make it to B.C. should go!

Yeah the resorts were empty since all the hotel space in the area was taken up by media, athletes and tourists, leaving very few rooms for the run of the mill skier. Very many days where the Bird was empty during the olympics. But I have a feeling that Whistler will have a much better party than Salt Lake did.