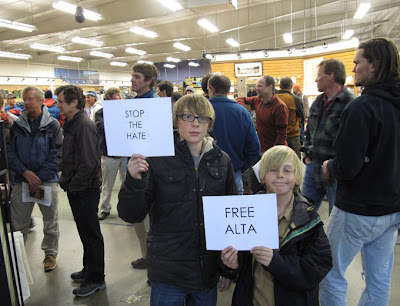 Me and the family went to speak our mind. The place was so filled up they wouldn't even let us in the door. We will eventually be heard!


Last winter the backcountry skiing community was up-in-arms over the news that Alta was considering a lift installation on Flagstaff Peak. With a threat of the U.S. government taking away the World War II era howitzers that Ski Patrol and UDOT currently use to control avalanches above Little Cottonwood Canyon, Alta has put the Flagstaff Peak lift idea on the table as a way to allow ski patrol access in order to conduct control work.
The issue has not gone away, and backcountry users have been extremely vocal in their opposition to this idea. They say a lift up Flagstaff Peak would not only mar the beauty of the Alta backcountry, but winter access by human-powered means would be severely limited in off-piste areas such as Cardiff, Days and Silver Forks.
So far, Alta has not said much about the controversy, but have admitted to exploring the Flagstaff Peak lift as an option for avalanche control due to the eventual phasing out the the howitzers. Their hope is that ski patrol work as well as skier compaction would stabilize the slope above Alta. Many feel that this plan is more about Alta being able to expand acreage for marketing purposes, and less about avalanche control.
Whatever the case may be, there will be a forum at the Salt Lake City REI on March 31 at 6:30 p.m. Hosted by Friends of Flagstaff, the discussion will focus on what Alta intends to possibly do on Flagstaff Peak, as well as what we, Cottonwood Canyon backcountry users, can do to let Alta know how we feel. The Salt Lake REI is located at 3300 S. 3285 E.

This means that Alta will be able to restrict access to a huge portion of backcountry skiing/boarding. Also this means that even more of Little Cottonwood will be restriced from snowboarding. Once again the retards at Alta have shown their hate. You can ride a monoski but not a snowboard??? Lets get real people.
Posted by Forrest