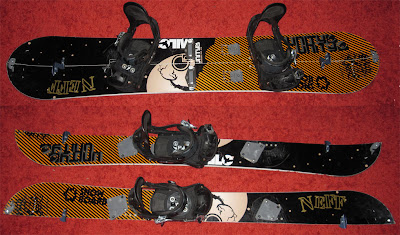 (click to enlarge)
I finally put the finishing touches on making my own splitboard. I have a few rants about the whole process. First of all Voile has a patent on the splitboard. Hence why all other makers of splitboards use the Voile system. My problem is that since they have a patent there is absolutely no competition for a better system. The system has not changed in like 15 years and I think there is room for improvement, but there is no pressure on Voile to step up their game.

I chose to split my own board since its much cheaper than buying a premade one. However this whole thing was a pain in the butt and if you can afford one already made and are not good with tools, then go for it. A big thanks goes to Micah for helping me figure this out and letting me use his tools! Thanks to Jonny A at Backcountry for getting me a deal on two kits! And thanks to Benny at Milo for giving me the lowdown on using the extra t-bolts and all the advice he gave to me to get through the process.

You would think that the Split Decision Kit would have much better directions to the whole process since there are so many steps. I am told I am not the only one to complain about this. The directions sucked! Be prepared to get frustrated. Also keep in mind on the directions they have a list of needed tools but some tools that are listed are not needed and some important tools are not listed at all? For example you must have a countersink drill bit, but there is not one mention of this tool in the enclosed directions.

We used a table saw to split the board, not a circular saw. I think that's the way to go if you have access to one. 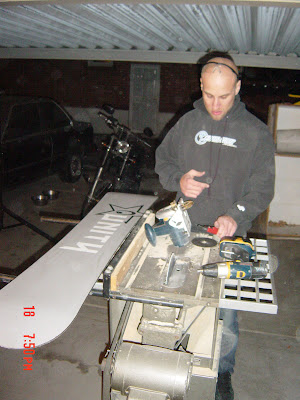 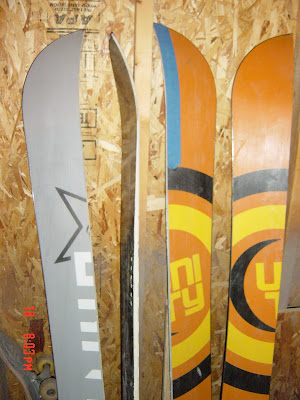 (click to enlarge)
If you look at the picture I marked in red where t-bolts are not needed and the ones marked in green are ones I added that the kit did not provide. Makes me wonder if the guys at Voile really snowboard or if they are skiers that happen to take a few powder turns once in a while. I think their lack of snowboarding shows in the kit. The red t-bolts are for the telemark mounting system. I understand you put some stress when in telemark mode but this is overkill, especially when the Voile kit does not use any t-bolts for the snowboard binding mounts. I am sorry but I don't trust just using wood screws and epoxy to hold my snowboard binding mounts down. I think those would rip out first hard powder turn. Also why have so many unneeded t-bolts, don't you want a smoother base if possible? My final split board has 17 t-bolts. This kinda freaks me out. However I am told by many that I won't even notice this in powder and to be honest I have no plans of riding this board in anything else.

(click to enlarge)
The areas marked in yellow is where I felt it was needed to use a t-bolt. I dont trust only using wood screws here. Also if you can use an existing insert from your 4 hole pattern, go for it. I was only able to use one existing insert (marked in blue). 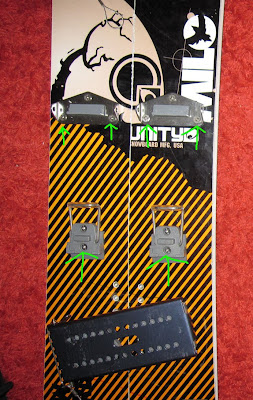 (click to enlarge)
Here are the telemark binding bolts that I think you could use a wood screw with epoxy instead of t-bolts. Use one T-bolt for each mounting piece and the rest wood screws. You will have less holes in the bottom of your board and I feel this would be strong enough.

Some things to keep in mind.
-Make sure your telemark binding set up doesn't interfere with where you want to put your snowboard bindings. Keep this in mind before you mount. You may be forced to set your stance closer to the tail than you want.
-Practice all your drilling on a old board. This way you get a feel of how the drill bits react and you do not make a mistake on your splitboard.
-Measure then re-measure all your drill holes before you drill. Being slightly off will have really bad results. There is not much room for error when making this thing, hence do not be afraid to practice on an old board first.

The board is pretty heavy but I am excited to go on some adventures with it. I think those yurt trips are going to be much easier now. Stay tuned for some stories and pictures from my future outings. I honestly don't know what to expect.
Posted by Forrest

I have wanted to make a board like this for such a long time. thanks for the write up. looking forward to seeing what you think about the set up.

Wow! I am so impressed that you did all that. Mel told me about split boards...you'll have to let us all know how they perform.

My split board is powered by an 800cc two-stroke motor....

Thanks for the post! I stumbled accross your post from sly's blog. I've been splitboarding in the Wasatch for sometime on my Volie 178 Swallowtail, which is a great powder gun, but wanting something a little more versatile, I just cut one of my old resort boards in half last weekend. I was planning on mounting the hardware tonight and likely would have followed Voile's instructions, thinking they must know what they are talking about. Then, walla, I see you post and think: very true, the last thing I want is rip out those plates. So, I'm getting me some extra T-bolts. Thanks for the tip--your timing was perfect. Maybe I'll run into you in the backcountry sometime since I've pretty much lost interest in resort riding unless I'm with my kids.