You could stare all day at the mountains, they are that inspiring. Click on photos to enlarge. 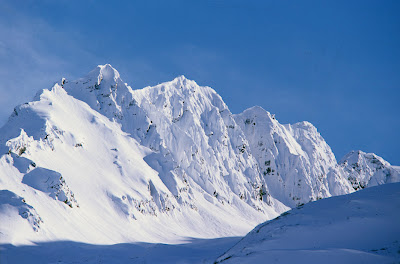 I had the privilege of getting 7 heli runs guided by the late Doug Coombs. I will forever have respect for that guy. He was a true pioneer up there. He would climb all these mountains by himself back in the day before helicopters. Runs that would take 5 minutes to get to the top in a heli would take him all week to summit and ski down. He would fly in by plane and land on a glacier, set up camp and bag peaks. 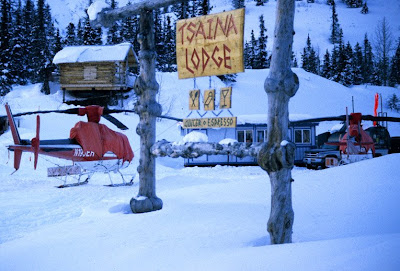 The parking lot at ABA. Guys would live in those RV's for 2 months at a time waiting for the skies to clear and hop on the heli. At ABA you could buy single heli runs. Sometimes a real nice option when the weather wouldn't break until late in the day. Last heli ride was always an hour before sunset. Sunset was around 10pm. 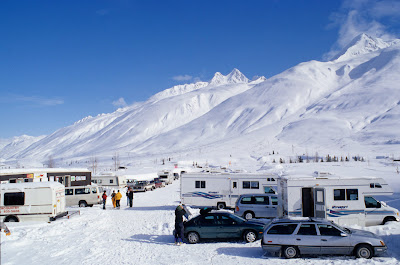 Mad Cow first skied by Doug Coombs. It got its name cause they said you had to have mad cow disease to ski it. One of the scariest runs of my life. So much exposure on skiers left and nothing but glacier crevasses on skiers right. You always had to know where you were in relation to all the hazards while managing your slough. It didn't help that a few runs earlier I hit some glacier blue ice and tumbled down a 3000 vertical foot face. I saw a different party ski this line after us and one of the skiers tumbled to the very edge of a 500 ft cliff. I thought I was going to see a man die. This picture is probably taken a mile away. 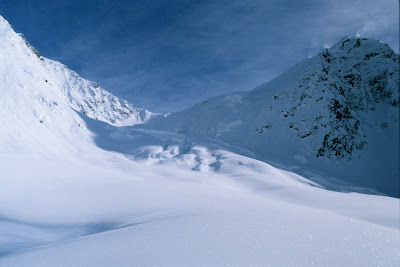 Me and Brad lived in this 4 wheel drive Aerostar van the entire time in Alaska. We took the back seats out and slept inside with sleeping bags. We cooked all our food with a coleman stove. No hotels for us, every dime was for the heli. 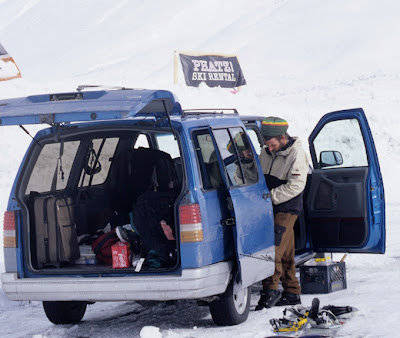 It was much warmer at sea level. Every night we drove down from the pass to sleep by the warm ocean air. 34 degrees and wet. But thats much better than the zero degrees nights on the pass. 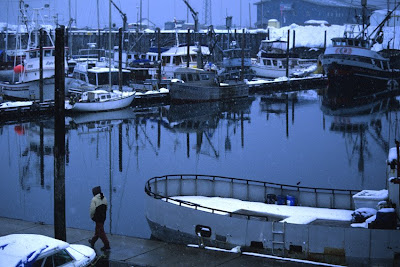 I have shown my students your Alaska photos. We just finished Dogsong, which takes place in Alaska. Can't wait for the new ones for next year. They all "ooh" and "ahh" and tell me how good the photos are - I agree 100%.